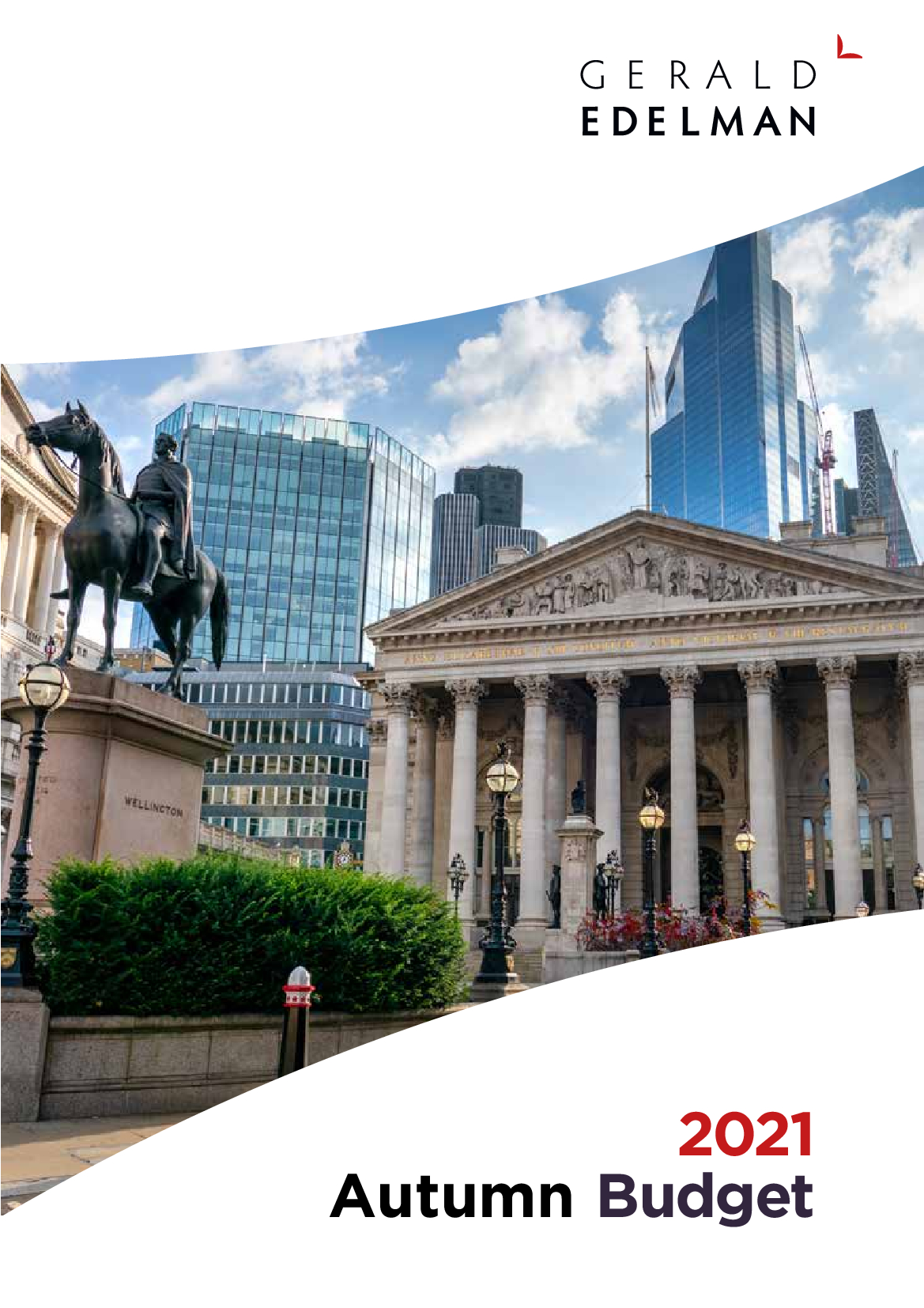 We are delighted to release our summary of the key announcements in the Autumn Budget 2021 statement.

The first autumn Budget for three years was a three-part presentation. The Chancellor’s well-trailed speech was accompanied by the first multi-year Spending Review since 2015 and the latest Economic and Fiscal Outlook (EFO) from the Office for Budget Responsibility (OBR).

Mr Sunak’s previous two Budgets had been dominated by the pandemic, which has wreaked havoc with the public finances. Third time around, the backdrop was brighter, at least relatively speaking.

In addition to recent helpful borrowing data, the Chancellor had the £42 billion of tax increases he announced in March and September. The extent of a further windfall was revealed in the Budget Red Book, which shows that suspending the State pension ‘triple lock’ next April will save £5.4 billion in 2022/23, rising to £6.7 billion four years later. It is therefore not surprising that few new tax-raising measures emerged in Mr Sunak’s second formal Budget of 2021. The reports from the Office for Tax Simplification on inheritance tax and capital gains tax have been left to gather more dust on the shelves of 11 Downing Street.

Mr Sunak was in spending rather than taxing mode on this occasion. He made two significant changes to Universal Credit, partially reversing the impact of the £20 a week reduction that took effect earlier this month. There were also cuts to business rates, air passenger duty and the cost of a pint of beer.

The Chancellor took advantage of better than OBR-projected economic performance both to spend more and to put some money aside. He must hope that his war chest is enough to cover whatever COVID-19 and rising inflation/interest rates conspire to deliver in the coming year.

National insurance contributions (NICs)
The lower NIC thresholds and limits will rise by 3.1%, in line with CPI inflation to September 2021. The upper earnings limit, upper secondary thresholds and upper profits limit will remain aligned to the unchanged higher rate threshold at £50,270 for 2022/23, as previously announced.

NIC rates will rise by 1.25 percentage points in 2022/23, as announced in the NHS/social care package launched in September 2021. From 2023/24, NIC rates will revert to their previous levels and a new 1.25% Health and Social Care Levy will apply to employers, employees and the self-employed (including those above State pension age).

Think ahead
NICs increase from 6 April 2022. Salary sacrifice arrangements, for example for employers rather than employees to make pension contributions, will offer even greater savings in 2022/23.

Pension contribution tax relief
In 2025/26, a new system will be introduced so that HMRC can make 20% top-up payments in respect of contributions made from 2024/25 onwards directly to low-earning individuals saving in a pension scheme using a Net Pay Arrangement. At present such contributions may not benefit from any tax relief and these top-ups will help align their outcomes with equivalent savers using Pension Relief at Source to save into pension schemes.

Pension charge cap
There will be consultation on further changes to the regulatory charge cap for defined contribution pension schemes to unlock institutional investment to support some of the most innovative businesses.

Company car tax
The company car tax rates already announced for 2022/23 will remain frozen until 2024/25, as announced at Budget 2020. From 2022/23 there will be no difference in the scale rate for emissions measured on NEDC or WLTP cycles.

National Savings & Investment (NS&I) Green Savings Bonds
Green Savings Bonds, which were announced in the March 2021 Budget, were launched by NS&I on 22 October and will be on sale for a minimum of three months. The NS&I Green Savings Bonds are a three-year fixed-term savings product with an interest rate of 0.65% and investment limits between £100 and £100,000.

Universal Credit (UC)
The taper rate in UC will be reduced from 63% to 55%, meaning that UC claimants will keep an additional 8p for every £1 of net income they earn.

The Work Allowance will be increased by £500 a year. This is the amount that households with children or a household member with limited capability for work can earn before their UC starts to be reduced.

The aim is to introduce both UC changes no later than 1 December 2021.

The plans to create a new housing element of Pension Credit, replacing pensioner Housing Benefit, will now take effect in 2025. This will align with the full rollout of working-age Housing Benefit into UC.

National living wage (NLW) and national minimum wage (NMW)
The Chancellor confirmed the reports of increases to the NLW and NMW which appeared before the Budget.

Inheritance tax (IHT)
The IHT nil rate band will remain at £325,000 for 2022/23. The residence nil rate band (RNRB) will likewise stay at £175,000 and the RNRB taper will continue to apply where the value of the deceased’s estate is greater than £2 million.

Stamp duty land tax (SDLT)
There are no changes to SDLT rates.

Annual tax on enveloped dwellings (ATED)
The ATED annual charge will rise by 3.1% from 1 April 2022 in line with the CPI.

The bank surcharge rate will be set at 3% from April 2023, so banks will pay corporation tax at 28%. The annual allowance within the surcharge will be raised to £100 million.

Think ahead
Dividend tax rates will rise from 6 April 2022. You could save tax if your company pays you a dividend in the current tax year.

There will be a temporary business rates relief for eligible retail, hospitality and leisure properties for 2022/23. Eligible properties will receive 50% relief, up to a cap of £110,000 per business.

From 2023, a 100% improvement relief for business rates will provide 12 months’ relief from higher bills for occupiers where eligible improvements to an existing property increase the rateable value. The relief will be reviewed in 2028.

From 1 April 2023 to 31 March 2035 there will be targeted business rate exemptions for eligible plant and machinery used in onsite renewable energy generation and storage. There will also be a 100% relief for eligible heat networks to support the decarbonisation of non-domestic buildings.

Business rates revaluations will take place every three years instead of every five years, from 2023.

Transitional relief for small and medium-sized businesses and the supporting small business scheme will be extended for one year. This restricts increases in rates bills for properties with a rateable value of up to £100,000.

Online sales tax consultation
The government will publish a consultation about an online sales tax ‘shortly’. If it is introduced, the revenue from such a tax would be used to reduce business rates for retailers in England and increase the block grants of the devolved administrations.

Income tax basis period reform
Income tax basis periods will be reformed so that a business’s profit or loss for a tax year will be the profit or loss arising in the tax year itself, regardless of the business’s accounting date. This removes the basis period rules, which result in tax being charged on profits twice in some circumstances, as well as the need for overlap relief. The new rules will come into force from 6 April 2024 with a transition period in 2023/24.

Research and development (R&D) tax reliefs
Qualifying expenditure will be expanded to include data and cloud costs. Other changes will refocus support towards innovation in the UK rather than overseas, targeting abuse and improving compliance. The changes will take effect from April 2023.

Think ahead
Your business might be entitled to a valuable R&D tax credit – even if it doesn’t make a taxable profit. Check out the new position; you might be surprised what expenditure can now qualify and how much it could be worth to you.

Annual investment allowance (AIA)
The temporary £1 million level of the AIA will be extended to 31 March 2023.

It will be charged on relevant profits arising after 31 March 2022, at 4% on profits exceeding an annual allowance of £25 million. It will be included in corporation tax returns.

Cultural reliefs
Museums and galleries exhibition tax relief (MGETR) will be extended until 31 March 2024. The headline rates of the tax reliefs for theatres, orchestras and MGETR are increased with immediate effect but will reduce on 1 April 2023 and again on 1 April 2024.

Alcohol duty reform
The government intends to restructure alcohol duty so that all beverages will be taxed in direct proportion to their alcohol content.

To simplify the regime, the government intends to reduce the number of main rates from 15 to 6, with common thresholds for each set of bands across product categories. The rates will be harmonised for drinks at 8.5% ABV or above and there will be reduced rates for products below 3.5% ABV.

The government also intends to introduce a common small producer relief, to reduce the tax burden on smaller producers of wine, cider, spirits and made-wine below 8.5% ABV. Duty rates on draft beer and cider will be cut by 5% to help pubs and support responsible drinking.

Asset holding companies (AHC) tax regime and real estate investment trusts (REITs)
A new framework will be introduced for the taxation of companies used by funds and institutional investors to make investments, while targeted changes will be made to the REIT tax rules, with effect from April 2022.

The levy will be a fixed fee based on their ‘size’ band, as determined by their UK revenue for the relevant accounting period.

Payments will be due after the end of the relevant year. The levy is intended to raise about £100 million a year to help fund anti-money laundering and economic crime reforms.

Diverted profits tax (DPT)
HMRC will not be able to close corporation tax enquiries into profits subject to a DPT charge until after the DPT review period ends. This will apply to any application for a corporation tax closure notice made after 26 September 2021.

Under another measure, companies can still use certain relieving provisions to amend their company tax returns and bring taxable diverted profits into charge to corporation tax during the DPT review period.

Tonnage tax reform
The government will introduce a package of measures to reform the UK’s tonnage tax regime for shipping businesses from April 2022. These reforms aim to see more firms basing their headquarters in the UK and flying the UK flag.

The measure will take effect on or after Royal Assent to Finance Bill 2021 but will apply retrospectively from 1 January 2021.

This will ensure that Northern Ireland motor dealers will remain in a comparable position to those applying the VAT margin scheme elsewhere in the UK.

The VAT margin scheme will be extended to Northern Ireland for motor vehicles sourced from Great Britain until the second-hand motor vehicle export refund scheme is implemented, if the government reaches a relevant agreement with the EU. It will then apply retrospectively from 1 January 2021.

Implementation of VAT rules in free zones
Additional elements will be introduced to the previously announced VAT-free zone model for freeports, with effect from 3 November 2021.

A free zone exit charge will ensure that businesses do not gain an unintended tax advantage from the zero rate in the free zone model. Existing VAT law will be amended to ensure that the free zone rules and warehousing rules are mutually exclusive.

Think ahead
Making tax digital. From April 2022 the requirement to keep digital records and submit VAT returns using MTD compatible software will be extended to VAT-registered businesses that are below the £85,000 VAT registration threshold. Make sure you are ready.

Making tax digital (MTD) for income tax self-assessment (ITSA)
As announced in September, sole traders and landlords, who have annual income over £10,000 will be given an extra year to prepare for MTD.

If you have questions relating to any of the announcements, please do not hesitate to contact one of our team.