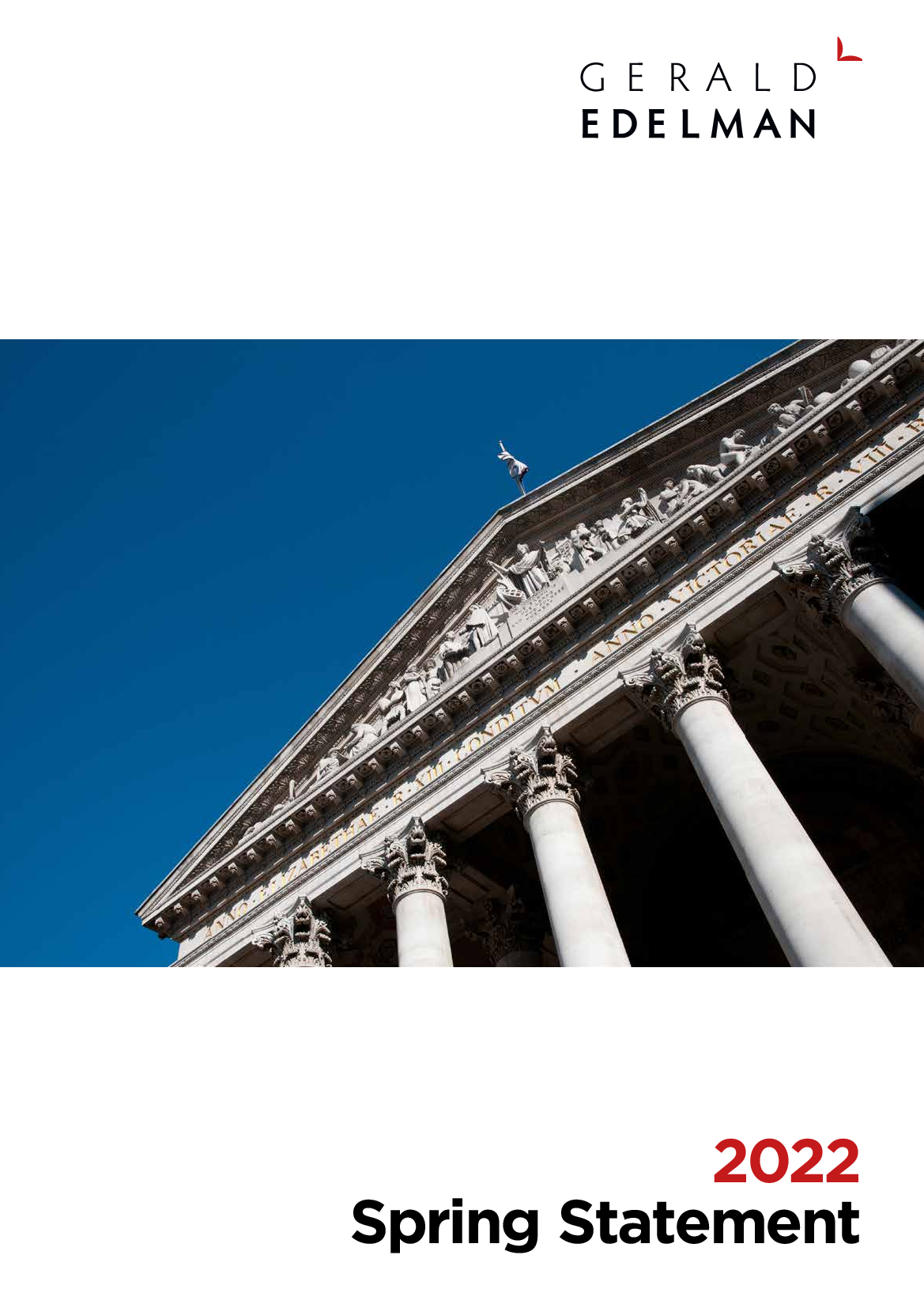 Just before Christmas, the Chancellor asked the Office for Budget Responsibility (OBR) to produce an economic and fiscal forecast for 23 March. The timing and brief nature of the accompanying Treasury announcement reflected Mr Sunak’s wish to keep the Spring Statement a low-profile event.

This was not meant to be a March mini-Budget, despite what many headlines have suggested. Mr Sunak believes in the once-a-year approach to major tax and spending changes, unlike some of his predecessors. However, in both 2020 and 2021, the pandemic put paid to that aspiration.

2022 has already proved similarly disruptive to his singular Budget plans. Early in February, a little over three months after his Autumn Budget, Mr Sunak was back at the despatch box presenting proposals for £9 billion of spending in the form of council tax rebates and repayable loans to mitigate April’s 54% utility price cap rise. Seven weeks and the Ukrainian invasion later, the Chancellor was once again before Parliament, introducing new measures to cope with soaring energy prices.

Tuesday’s public finance figures suggested the Chancellor had £25-30 billion of wiggle room and, to the surprise of some commentators, he used a good part of it in what looked suspiciously like a mini-Budget, complete with a deferred, rabbit-out-the-hat income tax cut for 2024/25.

Inflation and its headline label, the cost-of-living crisis, have now become the focus of economic attention.

When the Chancellor presented his Autumn Budget on  27 October 2021, the UK economy appeared to be emerging from the pandemic, with the Omicron variant yet to arrive. Back then, the most recent reading for CPI inflation (September 2021) was 3.1%, which the OBR formally projected would peak at 4.4% in 2022. By November 2021, CPI inflation was 5.1%, while the latest reading (for February 2022), released on the day of the Chancellor’s statement, is 6.2%.

Last week the Bank of England upped its inflation forecast once again, pencilling in 8% for April, with the risk of a higher rate still in October if current energy prices are maintained. However, in 2023 the Bank believes inflation will ‘fall back materially’, nearing the official target of 2% on a two to three year horizon.

Meanwhile the current rise in inflation has been a two-edged sword for government finances:

The debt and inflation combination was apparent in public sector finance figures published just before the Spring Statement. The Chancellor looks to be undershooting the OBR’s Autumn borrowing forecast for 2021/22 by over £25 billion and that gave him the wiggle room for some larger than expected giveaways.

The Chancellor announced several changes, including:

The rate of fuel duty on petrol and diesel is reduced by 5p a litre for 12 months from 6pm on 23 March.

The basic rate of income tax will be reduced to 19% from 2024/25. The cut will apply to non-savings, non-dividend income for taxpayers in England, Wales and Northern Ireland and also to the savings basic rate, which applies to savings income for taxpayers across the UK. Scotland sets its own basic rate of tax on non-savings, non-dividend income and will receive corresponding funds under the Barnett formula.

Eligibility for VAT relief on energy saving materials will be expanded and the VAT rate reduced to zero for five years from  1 April 2022. These changes do not apply to Northern Ireland.

From April 2023, all data, cloud computing and pure maths costs associated with research and development (R&D) will qualify for R&D relief.

The Autumn 2021 Budget introduced targeted business rates exemptions from 1 April 2023 until 31 March 2035 for eligible plant and machinery used in onsite renewable energy generation and storage, and a 100% relief for eligible low-carbon heat networks with their own rates bill. The implementation of these measures will now take effect from April 2022.

The Chancellor announced a ‘Tax Plan’ alongside the Spring Statement, setting a basis for consultation ahead of measures in the Autumn 2022 Budget. The plan echoes themes in Mr Sunak’s recent Mais lecture at the Bayes Business School and focuses on three areas:

Several tax and other changes (including freezes) will take effect from 6 April 2022. Most of these date back to the two Budgets of 2021. There are further important changes coming down the line.

These freezes, which are set to continue until April 2026, in fact represent a real-terms tax increase, given that the Bank of England forecasts that CPI inflation in April will be 8%.

Dividend tax rates will increase by 1.25 percentage points from 2022/23, taking them to between 8.75% (basic) and 39.35% (additional rate). Both the dividend allowance and the personal savings allowance are unchanged.

The National Assembly for Wales decided not to make any changes from the rates of the rest of the UK (excluding Scotland).

The secondary threshold for employer’s Class 1 NICs will increase by 3.3%, approximately in line with inflation to September 2021. The upper earnings limit (for employees) and upper profits limit (for the self-employed) will be frozen at £50,270, matching the unchanged UK higher rate income tax threshold outside Scotland.

The Class 2 NIC rate for 2022/23 will be £3.15 per week.  The rates for all contributions under Class 1 (employed) and Class 4 (self-employed) will rise by 1.25 percentage points for 2022/23 only, before dropping back to 2021/22 levels after that. The separate 1.25% Health and Social Security Levy will then take effect from 6 April 2023. Unlike the position with NICs, employees and the self-employed  over state pension age (currently 66) will be subject to  the new levy.

The contribution levels for workplace pensions operating under the automatic enrolment provisions for 2022/23 will be unchanged:

Company car tax for vehicles registered since 6 April 2020 will rise in 2022/23 for all but the highest emission vehicles.

The diesel surcharge will remain at 4% for diesel cars that do not meet the RDE2 emission standard (which became mandatory from January 2021). The maximum charge for diesels also stays at 37%.

The scale charge for purely electric vehicles (EVs) will double to 2%, but EVs remain an attractive option for anyone able to obtain such a vehicle under salary sacrifice arrangements.

The reduced 12.5% VAT rate for hospitality, holiday accommodation and attractions will end on 31 March 2022, at which point the rate will revert to the 20% standard rate.

In January and February the government announced new rules for student finance applying to students in England and Wales.

For existing Plan 2 student loan borrowers (those who started a course on or after 1 September 2012) and those starting courses in the 2022/23 academic year, the repayment threshold will be frozen at £27,295 up to and including 2024/25, before increasing annually in line with RPI thereafter.

For new students commencing study from the 2023/24 academic year:

The mechanism by which the Treasury accounts for these changes will produce an £11.15 billion windfall in 2022/23.

1. 0% for freeport qualifying property in England only

1. Employees generally under 21 years and apprentices under 25 years. Veterans in first 12 months of civilian employment. Employees at freeports in Great Britain in the first three years of employment starting from 6 April 2022.